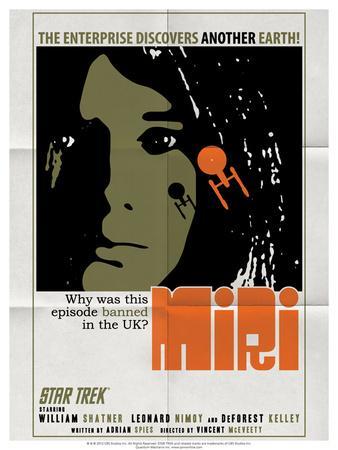 https://www.allposters.com/-sp/Star-Trek-Episode-8-Miri-TV-Poster-Posters_i9361873_.htm
HOME
//ENTERTAINMENT
//TELEVISION
//SCIENCE FICTION TV SHOWS
//STAR TREK (TELEVISION)
1 of 2
About the Product
Shipping and Returns
Episode 8: Miri. The sadeyed title character dominating this dark print is intended to convey a sense of melancholy. A plague in Miris world is killing children once they reach puberty. "The tears from (Miris) left eye were originally going to be scabs from the planets virus," says Ortiz. "Likewise, the hair along the right creates an almost waterfall or a riveroftears effect. I wanted Miri to be as special as Kirk thought she was, so I made her larger than life against the Enterprise."
9361873Item #9361873
Recently Viewed